Celebrating our half century

As Clan Donald Lands Trust reaches its half century milestone we take a look at some of the achievements of the past 50 years.

There’s so much to mention, and we’ve only been able to pick a few highlights here. Look out for our #CDLT50 posts on social media to see more stories from the archives. And don’t miss our museum exhibition opening in March 2022, celebrating Armadale Castle past, present and future.

Acquisition by the clan community: The death of Alexander Godfrey Macdonald, 7th Lord Macdonald, in November 1970, necessitated the sale of the Macdonald Estates in order to cover death duties and inherited honourable debts.  With the encouragement of Donald J. Macdonald of Castleton, President of the Clan Donald Society of Edinburgh, the young Lord and Lady Macdonald set off on a 10-week fundraising appeal across North America in May 1971.

The support amassed on this appeal allowed the Clan Donald Lands Trust (CDLT) to come into being. On 31 July 1971, the Trust completed the purchase of the 20,000 acre estate it holds to this day. It was, in effect, one of Scotland’s first community land acquisitions.

Visitor Centre opens: The mid-1970s were spent reclaiming the gardens and rebuilding the end section of the castle – the remains of the original 18th century manor house – to create a visitor centre. Opening in 1976 it provided a focal point for visitors, housing a tea room, museum and gift shop. The main part of the castle was in a poor state of repair and could not be restored.

Finance for the Visitor Centre project was generously provided by Canadian benefactor David MacDonald Stewart, whose patronage had been invaluable since the early days of the Trust.  With his tragic early death in 1984 the Trust lost one of its greatest supporters. 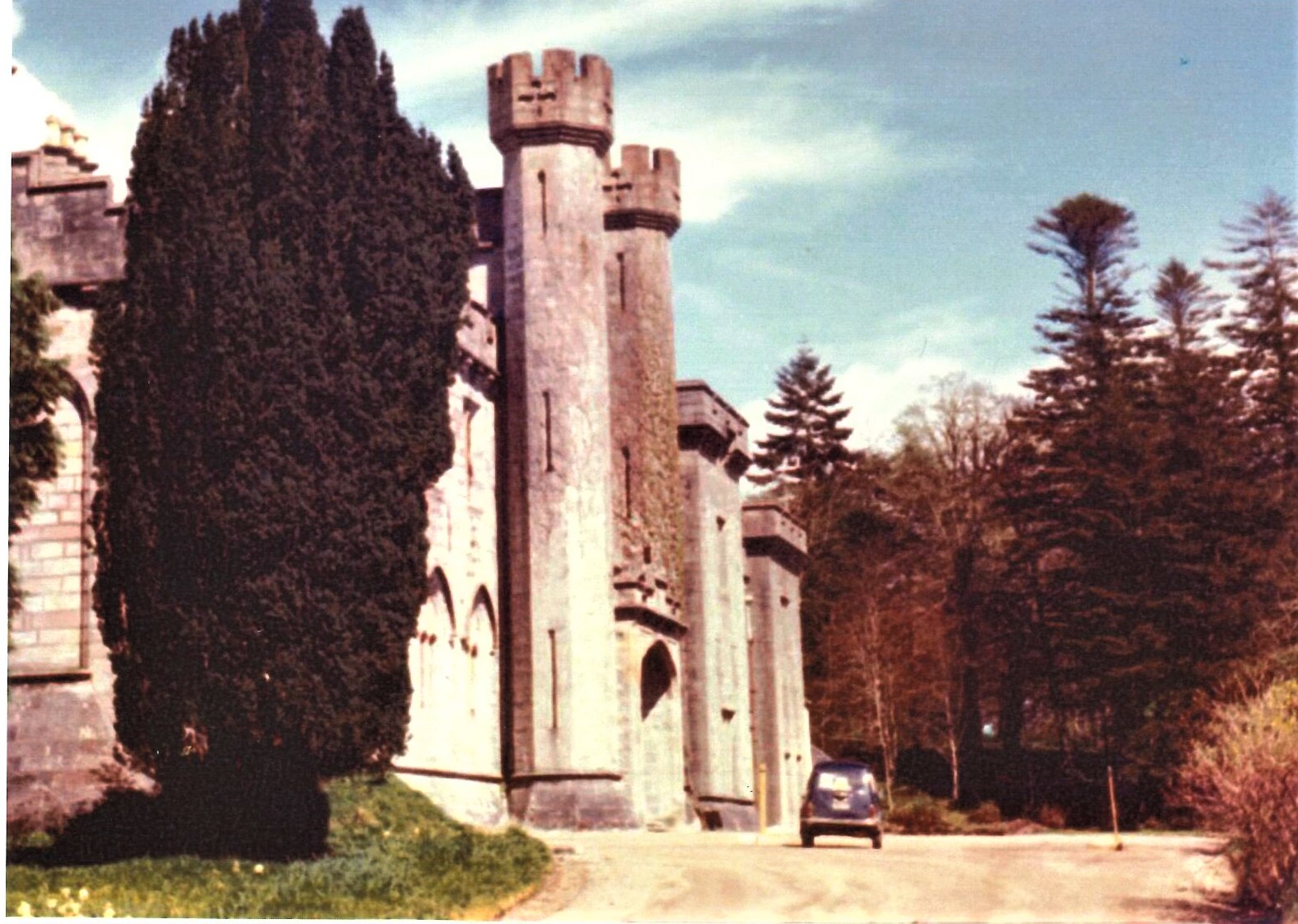 Armadale Castle was in a poor state of repair in 1971 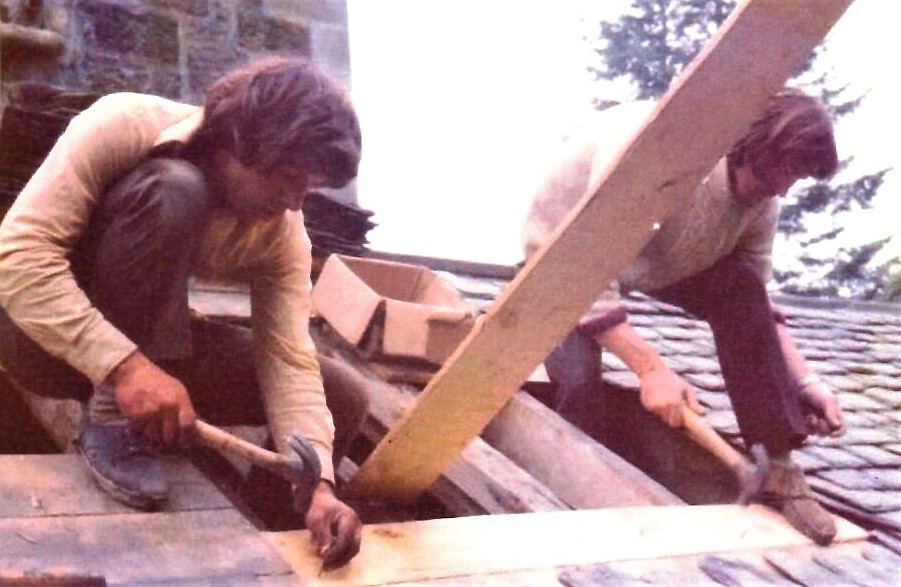 After two years of building work, the Stables was officially opened by clansfolk on 26 May 1984. The cafe and shop moved there from the Castle. Today the Stables continues to thrive as a lively eating and drinking venue.

Going from strength to strength: During the 1980s the gardens progressed magnificently under Tim Godfrey as Head Gardener. The year 1985 saw the creation of two ponds. The castle ruins were stabilised during this period, with a garden planted in the sculptured ruin of the southern section.

A clan gathering in 1981 attracted 350 clan members, and by 1986 Armadale had welcomed its 250,000th  visitor. In 1988 alone, almost 50,000 visitors came through the gates and were able to see the museum exhibition ‘The Headship of the Gael’ or Ceannas nan Gàidheal. A popular Ranger Service was also introduced in the mid-1980s.

Chair of the Executive Committee at this time, Ellice McDonald, Jr, was a driving force in these and many other achievements. Ellice and his wife, Rosa Laird McDonald, were generous benefactors and their support over many years has been invaluable to the success of the Trust.

Arts & culture: Other CDLT projects throughout the 1980s include support for the Gaelic Arts, including the establishment of the Donald MacDonald Quaich Piobaireachd Competition in partnership with the Skye Piping Society, and donations of clarsachs to local primary schools. An annual Junior Clarsach Competition would be inaugurated in 1990.

Museum acquisitions included Highland pistols made by Doune, Marshal Macdonald’s Baton and a number of Jacobite papers and pamphlets. Work also began on acquiring the Macdonald Estate Papers, which finally returned home to Skye in 1991. 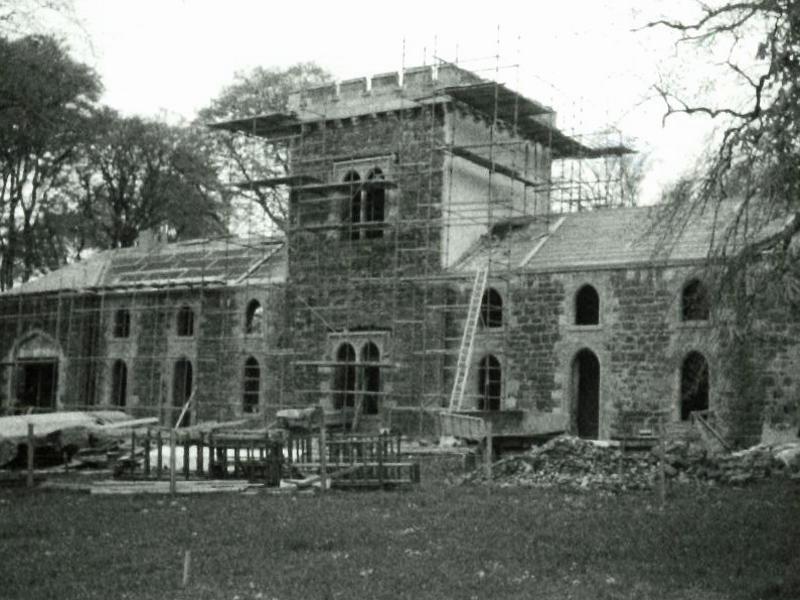 Restoration of the Stables 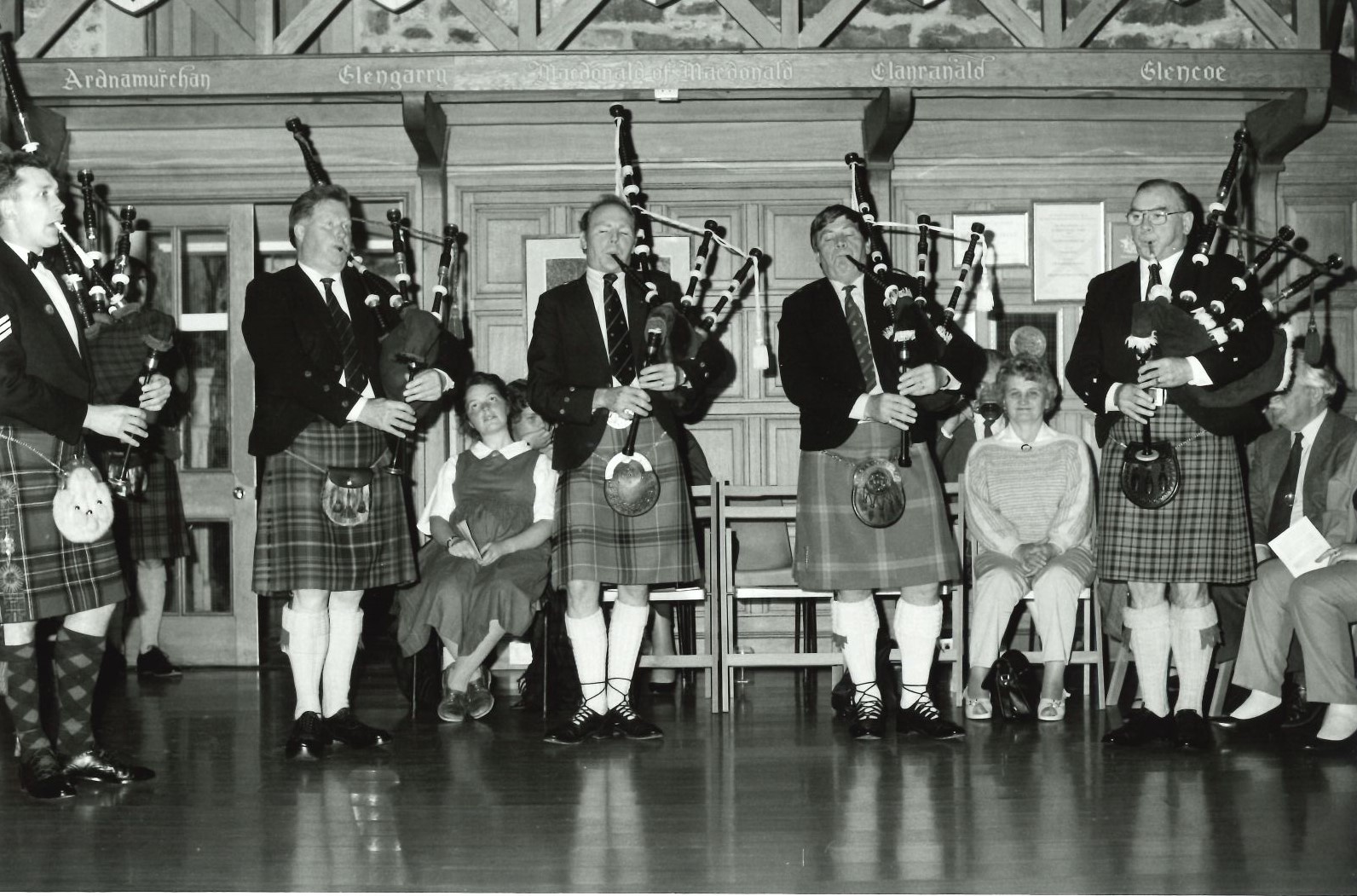 Major projects: During the 1990s, CDLT saw multiple longer term initiatives come to fruition. The ‘Great Wall of Armadale’ was a three-year project completed in 1991, creating a sheltered wall along the back lawn where flowers and shrubs could thrive. Other projects within the gardens included a third pond installed in 1995, and the restoration of the historic bridge. This was completed in 1997 thanks to the generous help of Catherine Teague Matthews who funded the project in memory of her mother.

The newly created self-catering log cabins became a hit with visitors at this time. The six lodges were completed in 1989 to the south of the main site. Receiving a Scottish Tourist Board rating of ‘Five Crowns, Highly Commended’, the cabins have since welcomed many return visitors.

Armadale House: During the 1990s the Trust was able to acquire the Dowager Lady Macdonald’s house at the edge of Armadale Castle grounds, which had earlier been occupied by the estate gardener. This was converted into a library, archive and study centre to be run by an archivist. The new space allowed the development of the genealogical service at Armadale and the return of the Macdonald Estate Archives in July 1991.

Museum developments: Improvements within the museum included the development of an audio-visual presentation, ‘The Sea Kingdom’, which helped share the story of Clan Donald with several dozen visitors at a time. The museum was at this time situated in the manor house section of the castle.

New acquisitions included the Kinlochmoidart Ring, an 18th century Jacobite era piece, which was purchased with the help of the National Fund for Acquisitions. Crofting and domestic artefacts from Skye were added to the collection through a long term loan from Col. Jock Macdonald and his sister Joanna Macdonald; these now form the basis for our Crofting Gallery in the museum.

Events and commemorations: The year 1992 marked the tercentenary of the Massacre of Glencoe. The annual commemoration was particularly poignant on this occasion as a plaque organised by CDLT was unveiled by Ellice McDonald Jr., Glencoe descendant and Chairman of the Executive Committee of CDLT.

The later 1990s saw the first of many garden and craft fairs take place, attracting more than 1000 people over two days of glorious May sunshine in 1997. 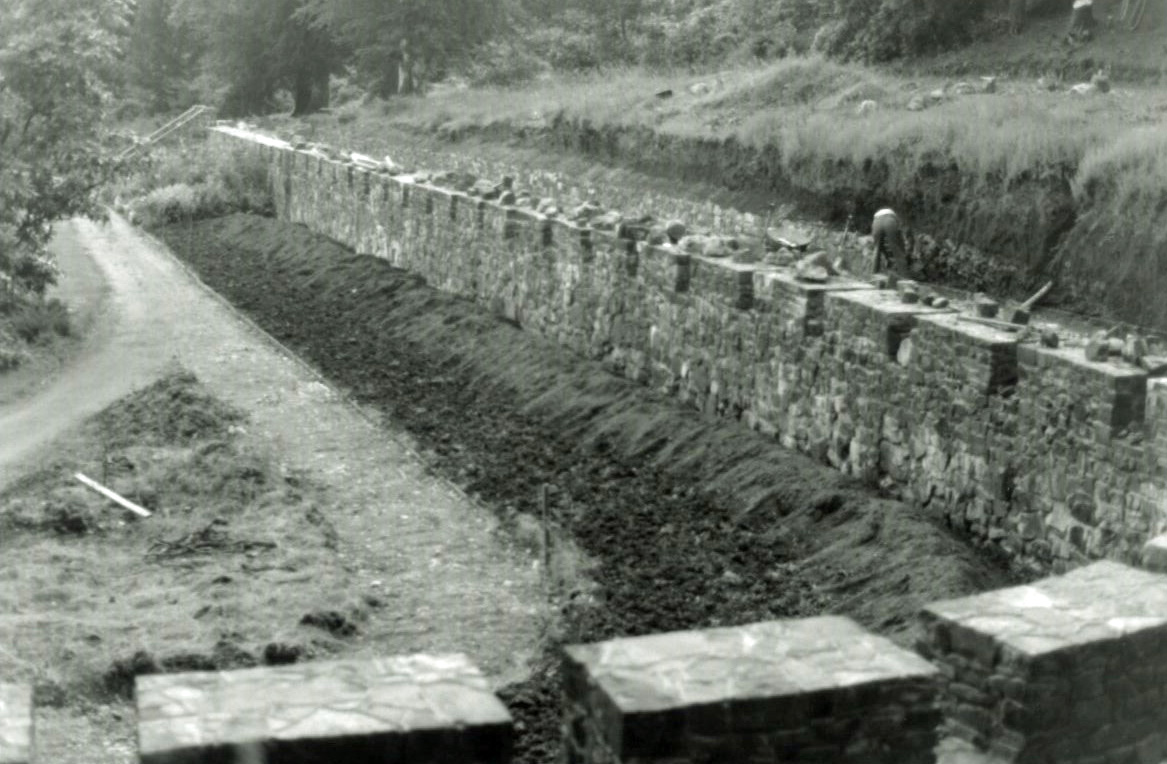 The 'Great Wall of Armadale' under construction 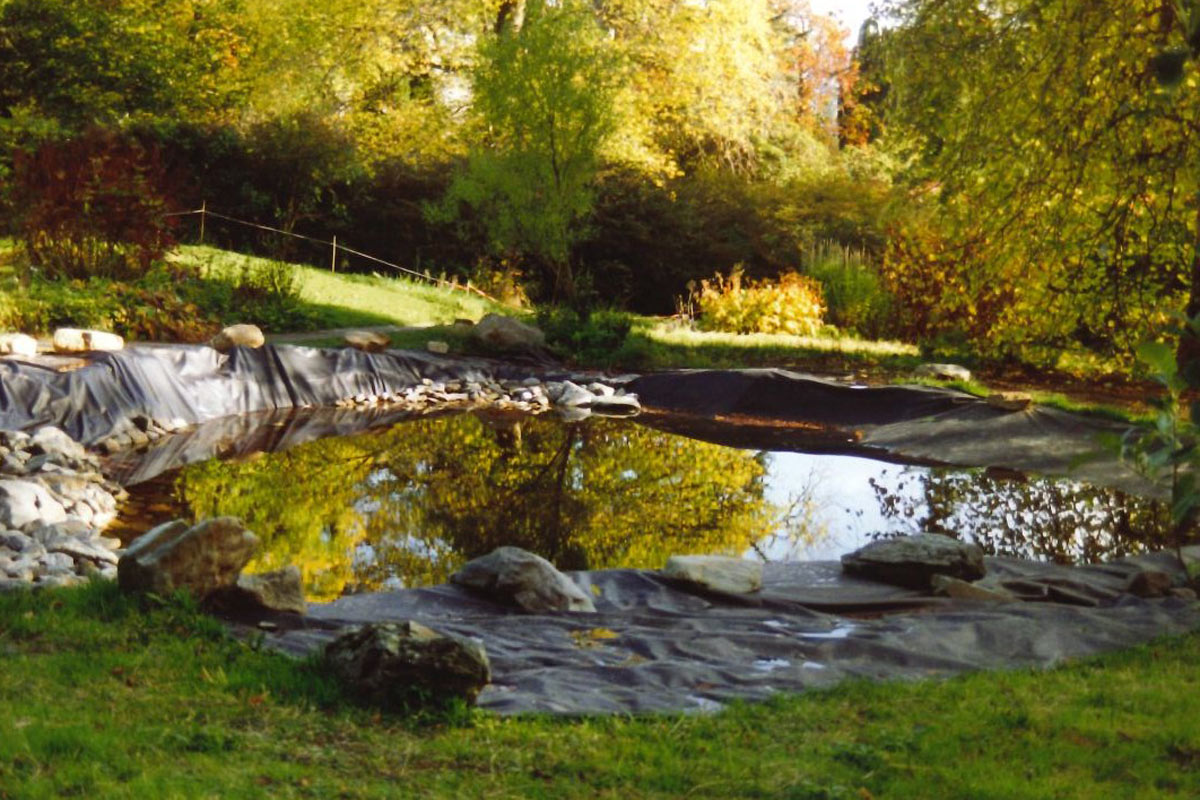 Museum of the Isles: The turn of the new millennium brought with it exciting prospects. Major donations from the Miss Marsaili Cuninghame bequest and Ellice and Rosa McDonald enabled the creation of a state-of-the-art museum, also housing the library and archive. Named The Museum of the Isles, it was built on the site of the original Little Garden at Armadale and opened in 2002. Specially designed galleries enabled the display of the valuable fine art and artefacts now in the Trust’s care. These included two important portraits which had been bequeathed by Miss Cuninghame: Angelica Kauffmann’s portrait of Alasdair Ranaldson MacDonell, and Henry Raeburn’s portrait of Sir James MacDonell.

Today, the Museum, Library and Archive lies at the heart of CDLT’s mission to protect and share the history and culture of Clan Donald and Highland history.

As part of the Highland Year of Culture in 2007, the Homecoming Gathering of Clan Donald was celebrated here at Armadale. Around this time the Museum of the Isles benefitted from new donations including Jacobite glasses and the 18ft skiff (boat) built c.1897 for MacDonalds of Redcliff in Portree. We are always trying to improve the experience for our visitors, and in 2006 introduced audio guides into the Museum.

Raven’s Rock Memorial: This memorial to Air Commodore Donald MacDonell of Glengarry, CB, DFC, 22nd Chief or Glengarry, was unveiled in 2002. Sculpted by Gerald Laing it depicts the crest from the Glengarry Clan Coast of Arms, the Raven on the Rock –  Creag an Fhitich.  Glengarry served as a trustee for many years before his death in 1999.

Across the estate: Clan Donald Lands Trust cares not only for the visitor centre and gardens but also the wider 20,000 acre South Skye estate – a major undertaking. The estate continued to work on estate forestry during this time, and new machinery and vehicles helped the estates team to improve the nature trails and paths created for visitors to enjoy. 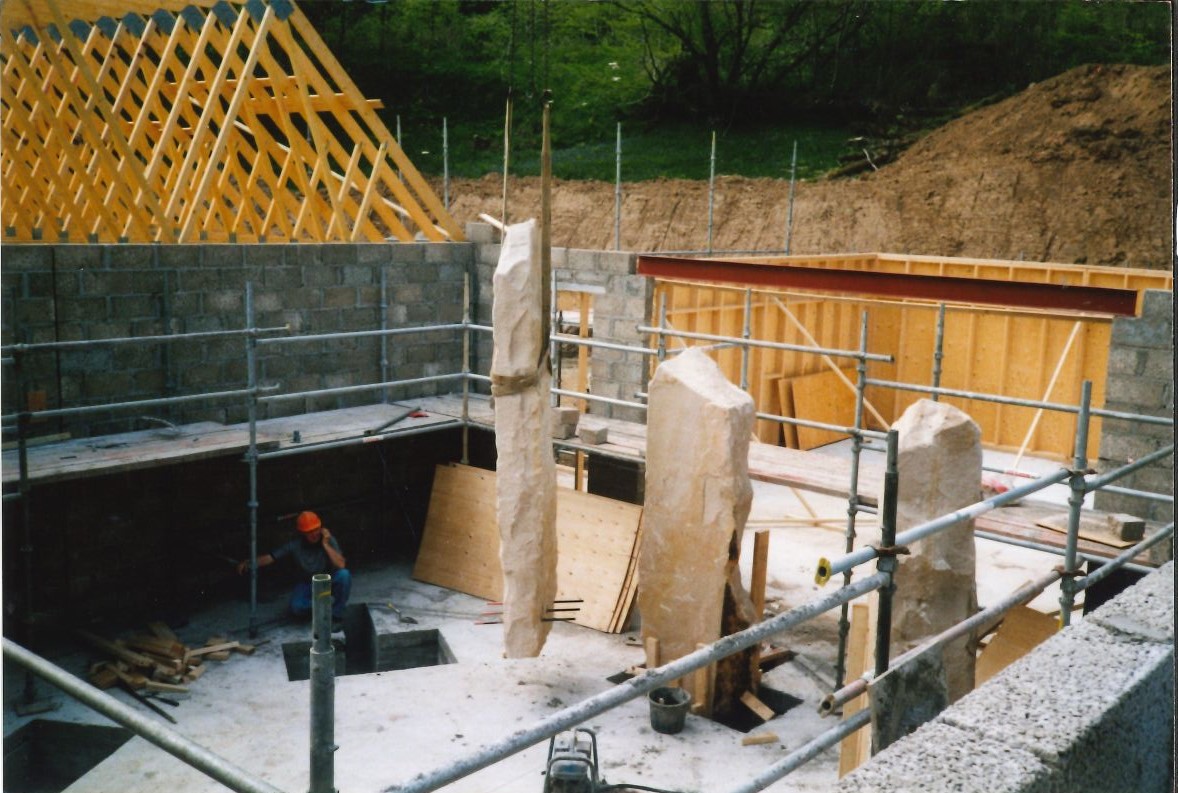 Building the Museum of the Isles 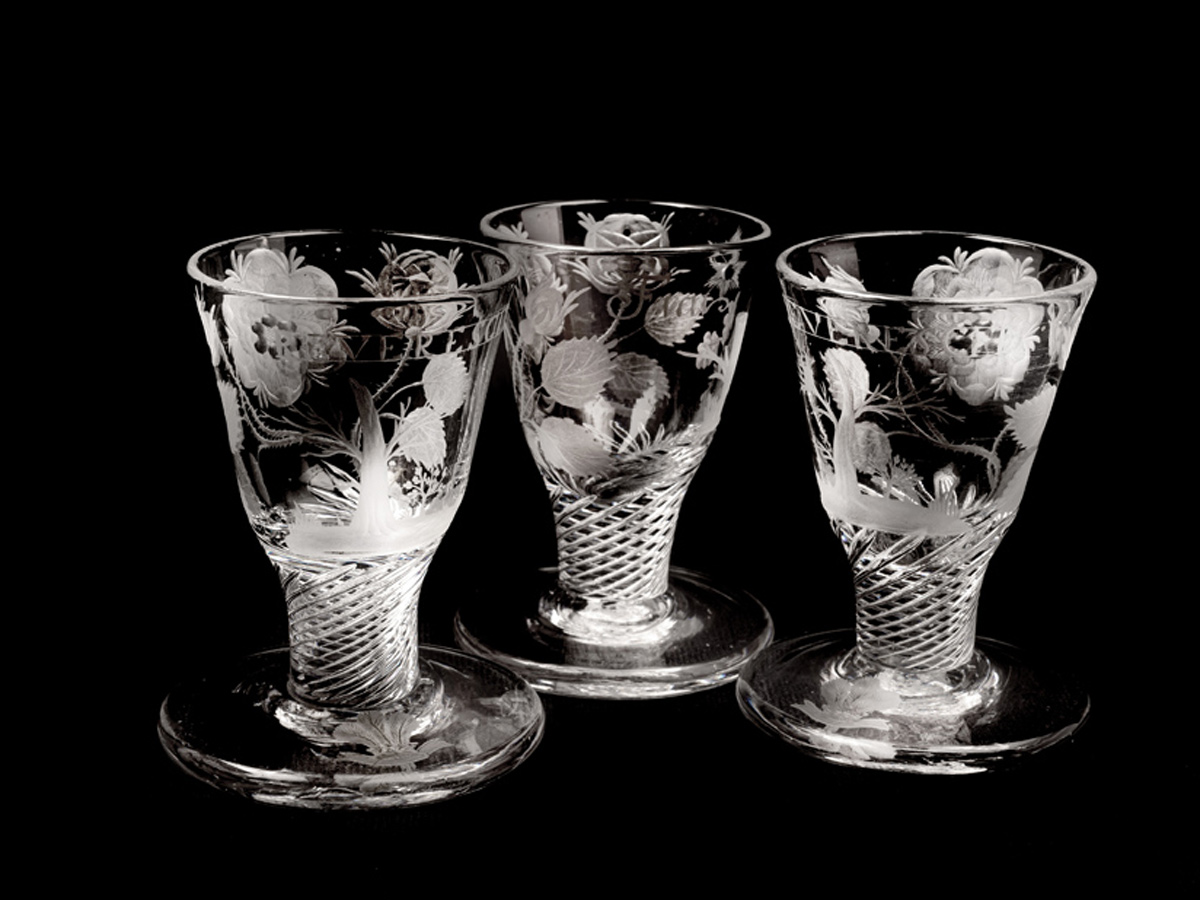 Some of the Jacobite firing glasses acquired by the Museum

Adapt and thrive: During the 2010s CDLT continued to thrive and adapt to changes, including a surge in visitor numbers to Skye. The attraction was now a firm favourite with coach parties, welcoming tens of thousands of tour guests each season. To meet this growing demand the Stables shop was converted to a café-bar, and the Gatehouse became the central location for welcoming visitors from all around the world to the site.

In 2013 Armadale was awarded 5 star Visitor Attraction status from the Scottish Tourist Board (now Visit Scotland), which has been maintained ever since. The following year saw the installation of one of our most popular sculptures: the ‘Homecoming’ Skye Terriers at the bottom of the front lawn. Installed by the Skye Terrier club, the sculpture celebrates Armadale’s long history with the breed and was unveiled by HRH The Princess Royal.

End of an era: Sadly, a number of important figures within the Trust passed away during this period. These included long-term trustee Ellice McDonald Jr., CBE, whose passing at the age of 100 in 2013 was a great loss to CDLT staff and members.

Gaelic performing arts: The Trust’s support for traditional Gaelic performing arts was further developed at this time. A major clarsach competition, the Princess Margaret Prize, was launched in 2018 to complement the long-running Donald MacDonald prize for Piobaireachd. The Trust also extended its support of the Gaelic arts worldwide and today is involved in more than a dozen competitions in Scotland and overseas – from Highland dancing to fiddle, Gaelic poetry and pipe bands.

Younger generation: One of the major strengths of the 2010s was the growth of our family learning programme. Building on earlier activity such as trails and schools talks, the museum team introduced dedicated activity workshops, handling collections and family events. Encouraging the new generation to enjoy, learn about and be part of our special place is core to our mission, and these activities have proved extremely popular with local families and visitors alike. 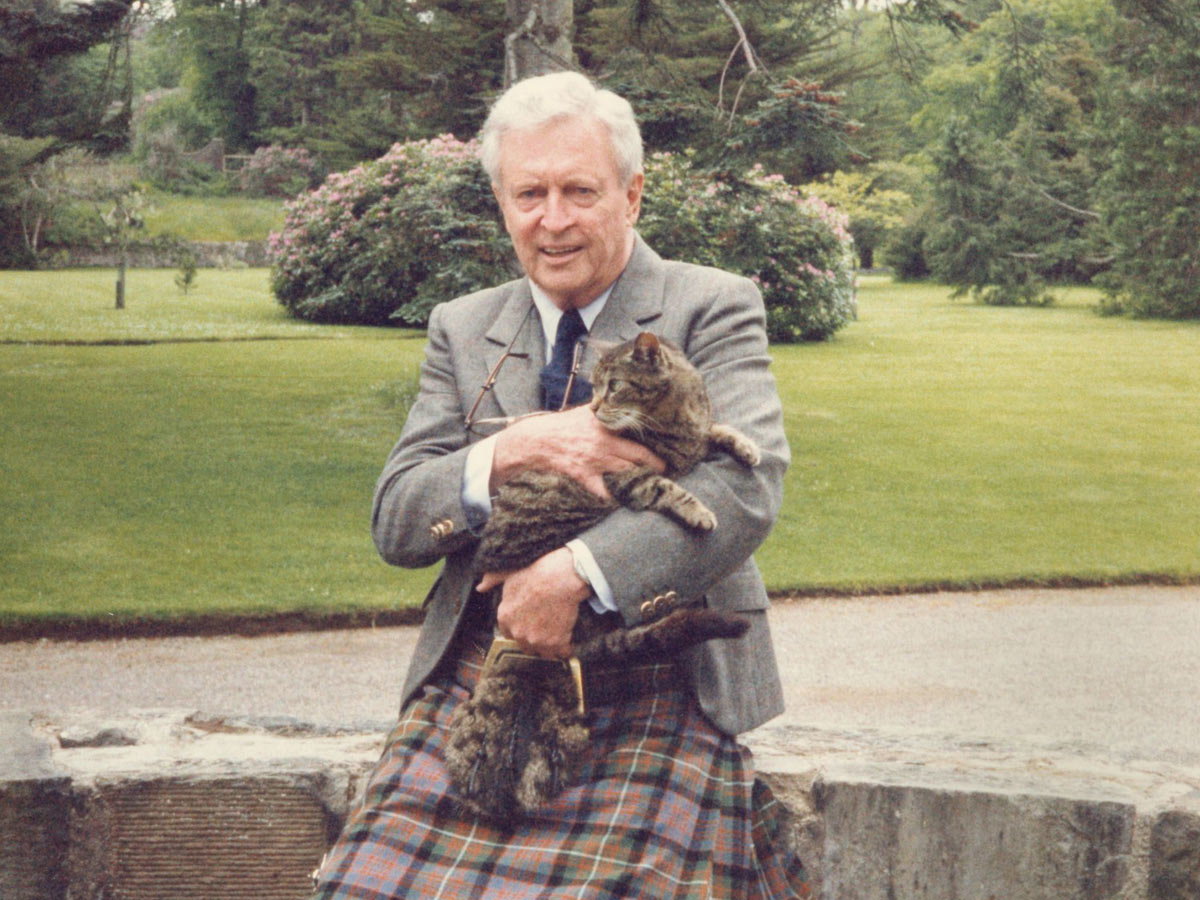 Family activities have proved popular in the museum

As we enter the sixth decade of Clan Donald Lands Trust we are looking to the future with a number of exciting new projects.

New learning space: The creation of the new outdoor learning space in the Old Laundry has provided us with a vibrant new facility for activities and events. Supported by Museum Galleries Scotland we are using the new space to strengthen our offer to young people and the local community.

Trees for the Future: Over the next three years we will be planting the next generation of trees in our gardens while we protect some of the world’s most endangered species. This major new initiative is a collaboration with the prestigious International Conifer Conservation Programme at the Royal Botanic Garden Edinburgh. As part of the ambitious programme we are planting over 100 conifers in our grounds, many of them endangered in the wild. Members of the public are invited to ‘adopt a tree’ to show support.

Future ambitions: With our new CEO, Alex Stoddart, in post from September 2021, we will be working with our local and clan communities to build a 21st century vision for Clan Donald Lands Trust. In doing so we will be building on the achievements of the past 50 years and looking forward to what we can accomplish, in local partnership, for young people and future generations. We firmly believe that their future on our island, and the durability of our culture and heritage, are inextricably entwined.

To find out how you can help us realise our ambitions visit our Support Us page. 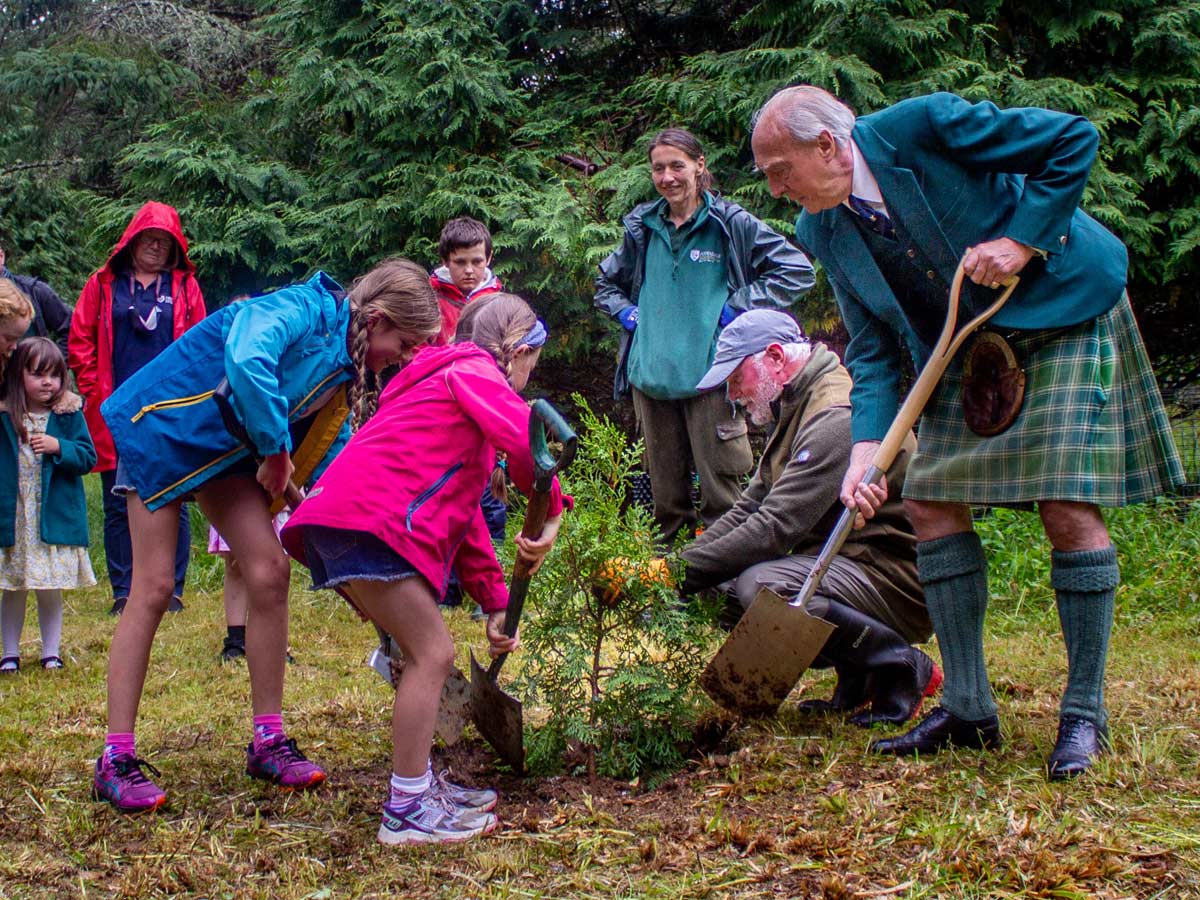 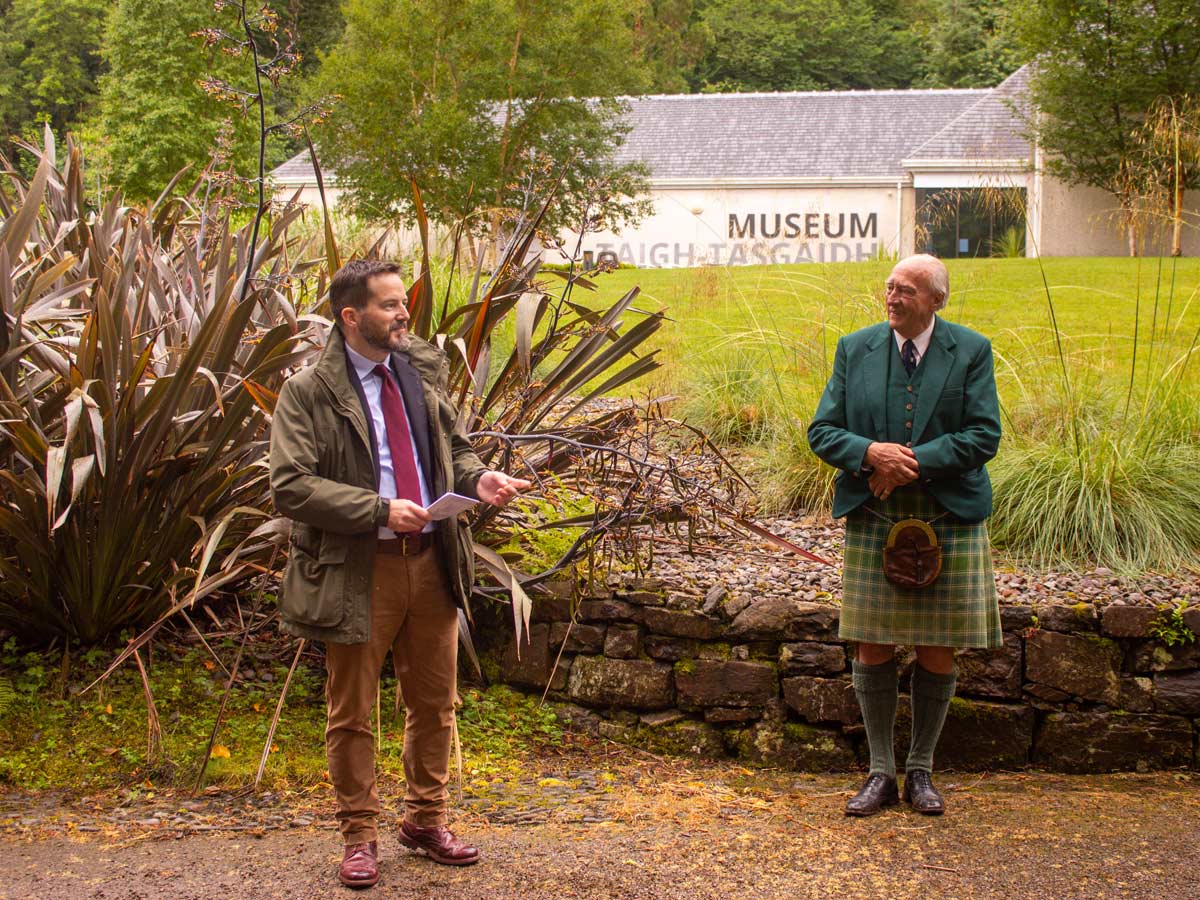 Trees for the Future programme