Time flies when you’re in the garden!

We are lucky to work with some fantastic volunteers at Armadale Castle. Here our latest recruit in the gardens, Isabel, shares impressions of her first few weeks with us. Be sure to say ‘hi’ when you see her in the gardens…

It’s nearly two months since I was welcomed as a garden volunteer on a sunny morning at the start of August and shown around the garden by Garden Consultant Andrew Peters. Andrew is incredibly knowledgeable and passionate about trees, plants and his work here at Armadale, so I couldn’t have got off to a better start.

At that time there were still lots of beautiful wild orchids sprouting through the long grass in areas that have been allowed to re-wild under the shade of some of the magnificent trees.

In the first week I joined the ‘girl-power’ team, Lisa and Kathryn, as they were putting a new cover on one of the three large polytunnels. The shade tunnel, as it is called, is a space to bring on new plants such as those recently propagated or potted up. Some of the plants are available at the Gatehouse for a donation – but you have to be quick.

I was excited to hear that Armadale has been selected as an official Satellite Garden for the International Conifer Conservation Programme, a partnership with Royal Botanic Garden Edinburgh. The partnership has resulted in the gifting of 140 young conifers from around the world and I had the privilege of planting a Chilean one myself, with a catchy name Rhaphithamnus spinosus. One to remember! 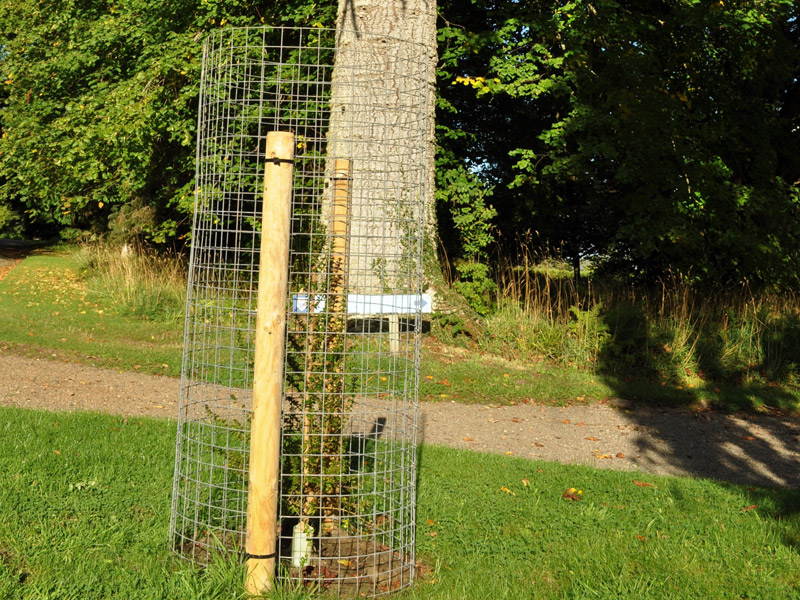 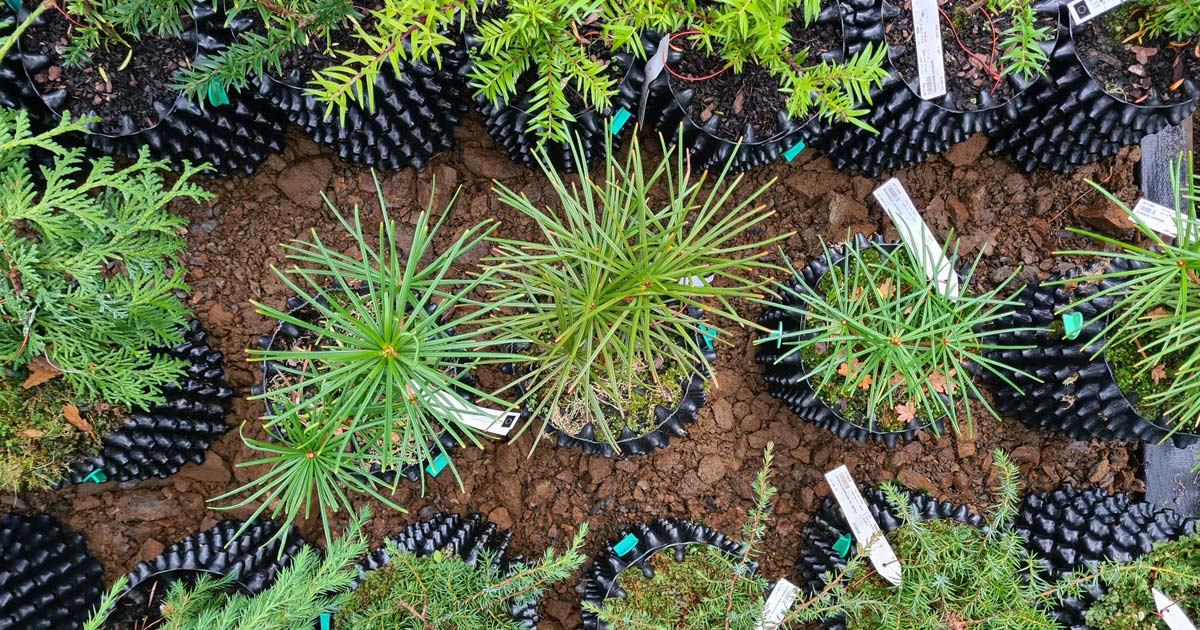 It has been extraordinarily dry and un-Scottish weather since I’ve been here – not something to complain about you might think, and the views across to Knoydart are spectacular when it’s clear. It does mean though that the newly planted young conifers around the garden need to be watered regularly, which I join in with on a Friday.

The garden team certainly have their work cut out for them on this 40-acre plot and I soon realised what an operation it is. The size of the place means that it’s most practical getting around on four wheels. It has been great fun learning to drive the tractors and trailers, enthusiastically accompanied by the gardeners’ loyal four-legged companions. Rule number one: Don’t leave your midge net, Smidge or water bottle behind when you set off as it can feel like a long walk back to the tea shed!

Working with other garden volunteers has been a really nice way to meet new people and help maintain the garden at the same time. A weeding ‘session’ with a group of 4 or 5 women certainly gets results quicker and you can still have a blether (multi-tasking!). 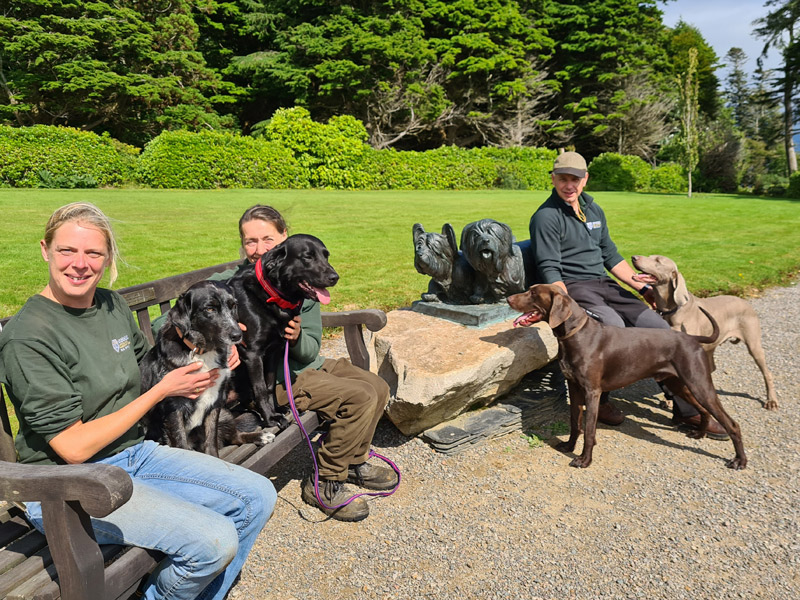 Meet the team - on two legs and four 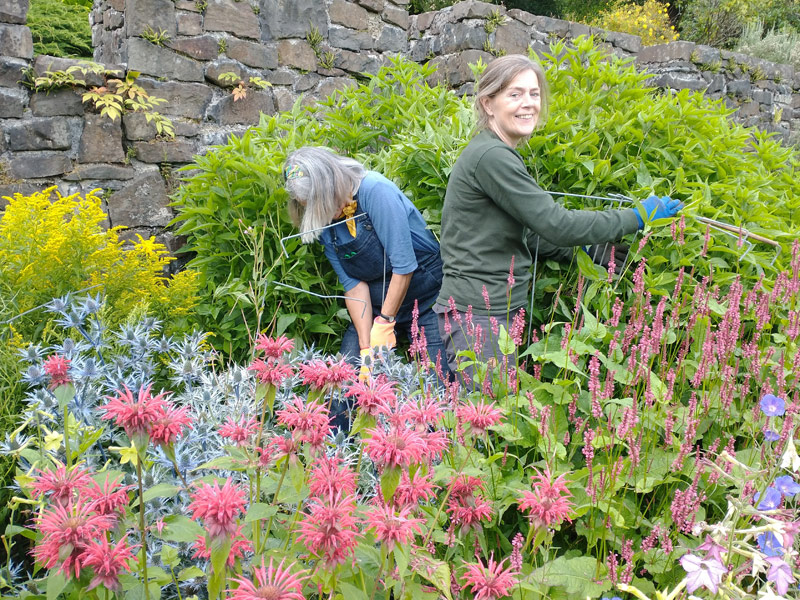 Isabel and Rosemary get stuck in to the herbaceous border

One Sunday I joined a group of volunteers to help with a much more strenuous task of removing Gunnera (giant rhubarb) from the wider estate because it is an invasive plant. With roots the size of tree trunks it is no mean feat. Fortunately, Estate & Gardens manager Chris had gone before us in many places with his digger to take the back-breaking element out of the task. It was a hot day though, and it was a lot of work to slice the Gunnera roots into chunks that we could move into the trailer. 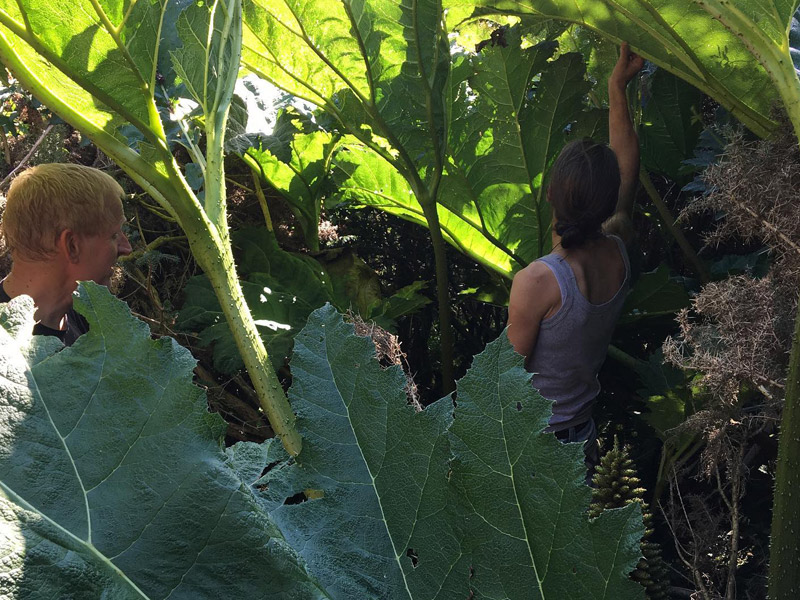 Volunteers amidst the Gunnera

The longer I spend here, the more I am in awe of the beauty of the place. Some leaves are now starting to turn and I look forward to seeing the autumn colour. As I said, time flies when you’re in the garden and volunteering here is a great way to learn and experience each season.

If you would like to volunteer with us in the gardens, see our volunteer page for the task description and how to apply.